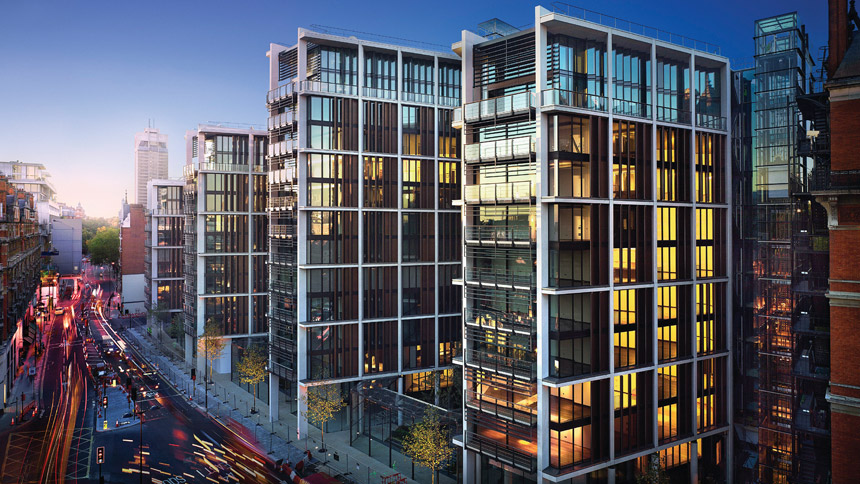 The Cost of Sleeping in London

By Webb Ward
The cost of living in London has long been at a premium compared with the rest of the UK but how exactly do these costs compare across different types of accommodation and what does this mean for business? With arguments being put forward to raise London’s minimum wage to better reflect living costs, Wetherell’s recent press release shows that increased accommodation costs have actually meant potential new opportunities for investors but also that there is still a demand for luxury abodes.

The Cost of Sleeping in London These are some of the findings of the new ‘Sleeping in London’ report on the hotel, serviced apartment and private flat-rental markets undertaken by leading West End and Mayfair estate agent Wetherell.
To deliver ‘Sleeping in London’, Wetherell commissioned Dataloft, in association with Lonres, to undertake a detailed analysis of 5 star hotel room/suite; serviced apartment and rented flat rates across Mayfair. Comparisons were then drawn between the Mayfair market and other districts such as Knightsbridge, St James’s and Whitehall/Strand using findings from other research material. The report has also made observations about hotel and branded residences development across PCL. The report has drawn on data from Lonres, HVS, Statista and other hospitality/property industry information.

Hotel Costs Outstrip Letting and Serviced Accommodation
The report finds that the average cost of renting a 1,038 sqft 1 bedroom 5 star hotel suite in Mayfair is £2,050 per night, which is eight times more expensive than the equivalent cost (£248 per night) of staying in similar sized private rented furnished apartment. The cost of a 5 star Mayfair hotel superior room at £497 per night is double the cost of private rented accommodation whilst a serviced Mayfair apartment averages £325 per night.

In order to analyse the costs of the various accommodation types on an exact like- for-like comparison the report also analysed average room/unit costs by £ per sqft. The findings were the same: 5 star hotel suites are the most costly at £13.83 per sqft; 5 star hotel superior rooms cost £10.42 per sqft; serviced apartments cost just £3.49 per sqft whilst private rented accommodation provides the most value at £1.90 per sqft.

Whilst private rented accommodation in central London tends to make 100% of its revenue from rental income, in the hotel sector 72.9% of revenue is from room rental, with 12.8% from food, 5.7% from beverage and the balance derived from lifestyle facilities such as health spa and beauty treatments (HotStats).

Costs & Convenience: It's All A Matter Of Length Of Stay
The report highlights that the costs and viability of the different types of accommodation is also influenced by the length of stay at them; their availability and tenancy rules. Private rented furnished accommodation, although highly cost effective, normally requires a tenancy of six to twelve months or more. So staying for one night like the flexibility provided by a hotel is impossible.

In addition, hotels can sometimes offer special price deals to guests staying for exceptionally long periods. These factors enable hotels to hold their own against serviced and private rented accommodation. Likewise serviced apartments typically require a minimum stay of three or seven days. So for short stays or visitors requiring flexibility (e.g. stay for three days; leave and return a week later stay for two days) London hotels are often the most convenient and cost effective option.

Mayfair Comes Out on Top
At an average of £2,050 per night for a 1,038 sqft one bedroom suite and £497 per night for a 334 sqft superior room, 5 star hotel rates in Mayfair are the highest in the London luxury hotel market, with a 4% price premium over equivalent values in Knightsbridge and a 60% price premium over St James’s, Whitehall and The Strand.
Mayfair has the most expensive hotel suite in the capital – over £11,700 per night for a stay in the opulent Royal Suite in Park Lane’s Intercontinental Hotel. Mayfair also contains the largest number (4) of the top 10 most expensive hotel suites across the capital (HVS 2014).

Average occupancy rates in this luxury sector are a robust 78%-80%, clearly indicating a demand across the market. In addition, on an international comparison, London’s 5 star hotel occupancy rates are now amongst the highest in the world, outstripping Dubai (79%), Paris (78%), Munich (77%), Moscow (70%), Barcelona (69%) and Rome (69%) (HotStats).

In addition, the buoyant prime residential market has caused a sharp increase in land values in areas including Mayfair, Knightsbridge and Whitehall. The main consequence of this for operators in the mid range and budget hotel markets is that the costs in these locations are becoming too high making ultra-luxury hotels, residences and retail formats the only viable options on available sites.

Narrowing viability, the significant undersupply and strong performance on a global level is why there continues to be a spate of luxury hotel openings in London: 175-bed Edition by Marriott; 90-bed Ham Yard and the 26-bed Chiltern Firehouse Hotel by Andre Balasz on Chiltern Street.

Others in the pipeline include the 75-bed Beaumont Hotel in Mayfair (opening Autumn 2014), the refurbished Lanesborough (scheduled to re-open end 2014), Galliard Group’s 235-bed 5 star hotel conversion of the former Scotland Yard headquarters at 3-5 Great Scotland Yard scheduled to open in 2016 and Admiralty Arch which is planned to become the 100-bed Armani London Hotel, opening in 2016.

As real estate values across PCL have risen there has also been a sea change in attitudes towards property within the hotel sector. In 2000 the majority of hotel operators were owner occupiers and there were a limited number of developers with the desire and ability to deliver quality hotel developments. Increasingly there has been a greater degree of flexibility in investment, hotel-construction and ownership, and a dramatic rise towards outsourcing hotel management or leasehold structures, which has also increased the sectors appeal with investors.

Previously residential focused developers such as Galliard Group, have expanded into the hotel development market undertaking projects including 3-5 Great Scotland Yard, pipeline hotels in Canary Wharf and Greenwich and completed hotels like the 68 bed St James’s Club & Hotel and the 398 bed Park Plaza Hotel at County Hall. Galliard Group also developed Marconi House in conjunction with ME Hotels, a branded residence which is reviewed below.

The Hotel And Private Rental Markets Are Becoming Alike
Another key trend in the London market is how the hotel room/suite, serviced apartment and private rented apartment markets are becoming increasingly similar, offering identical products and becoming extremely interconnected.
Increasingly West End apartments are being rented fully furnished, with stylish brand new interior designs and landlords taking inspiration from the hotel sector. In 2014 79% of apartments rented in Mayfair have been furnished, up from 74% in 2013 and just 56% in 2009. Similarly serviced apartments are increasingly offering house-keeping and leisure facilities very similar to hotels.

Likewise, the largest hotel suites now also offer in-room dining, entertainment and outside terrace space and basic kitchenette facilities. The majority of 5 star hotels now offer ‘signature suites’ which like apartments are interior designed by renowned designers with bespoke fittings, furniture and works for art. Examples include ‘The Apartment’ a 3,068 sqft apartment style suite at The Connaught and the Royal Suite at Claridges.

The One Hyde Park Effect: Branded Residences
Arguably the most “game changing” recent development in the London luxury property and hospitality market is the emergence of branded residences, which the ‘Sleeping in London’ report forecasts is set to grow and become a major niche sector of the London property/hospitality market.

Branded residences are the ultimate synergy vehicle, an ultra-luxury hotel with rooms and suites, complete with an additional wing/section of the building for private sale or serviced apartments. Branded residences are a highly lucrative revenue stream product, enabling income generation from apartment sales; hotel licensing, hotel room rates, hotel food, beverage and leisure facilities and serviced apartment services, at the same time benefitting from cross-selling opportunities across all sectors.

This market is massively undersupplied at present and there are currently less than a dozen branded residences across inner London.

The most high profile are One Hyde Park in Knightsbridge (Mandarin Oriental), Bulgari Residences & Hotel in Knightsbridge, The Shard (Shangri-La) at London Bridge, Marconi House (ME Hotels) on The Strand and The Residences at W Hotel (Starwood Hotels) on Leicester Square. Currently branded residences are limited to 5 star hotel formats, but the success of the existing projects clearly indicates that the format could also be strategically expanded into the 3 and 4 star hotel sectors, linked to lower priced serviced or private sale residences.

With a 3 or 4 star hotel format facilitating a lowering of entry prices, this could also facilitating an expansion of the branded residences format from its current PCL operating area, to outer London or key London commuter hub locations.

Opportunities In The Private Rental Market
Since 2009 rental values for private apartments in Mayfair have increased by 33% since 2009, compared to a 25% increase for hotel rates. For landlords this increase in rental values, alongside the rise in asset values, has made the rental market a potentially highly lucrative sector in which to invest.

Wetherell highlight that over a last 2.5 years a number of super-prime quality rental apartments have been released onto the luxury rental market in locations including Mayfair, Belgravia and Knightsbridge and this has created super-rent values at the very top end of the London lettings market. Wetherell highlight that even three years ago monthly rents of £60,000 to £80,000 were unusual, now they are becoming more frequent. A rent of £200,000 per month, the price of buying a small London studio flat, would have been unheard of, yet now a 5 bedroom penthouse in Knightsbridge can command such an impressive rental value.

In the sub-£5 million housing market in Mayfair which accounts for over 80% of sales, apartments priced between £1-£2 million and £2-£3 million sell for values that average £1,525 per sqft and £1,865 per sqft respectively. Wetherell highlight that the clear opportunity for investors is to acquire a one or two bedroom apartment in need of refurbishment, modernised the specification and interior design to create an ‘Armani style’ residence, and then rent the apartment out and effectively “enter the luxury hotel business”: the difference between average rates for 5 star hotel suites and luxury rented flats in Mayfair now being just 12%.