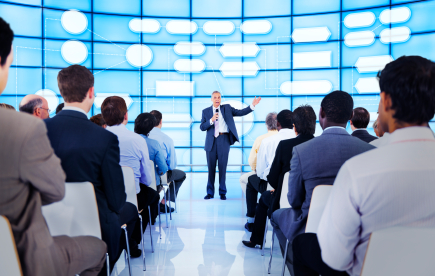 Chief executives are not the strong communicators they think they are, according to a new study of their impromptu speaking.

The study, to be published in a forthcoming issue of Business and Professional Communication Quarterly, analyzed video interviews of 40 CEOs — many from Fortune 100 companies — and focused on their responses to two questions: "What are your strengths as a communicator?" and "What are your weaknesses as a communicator?" All CEOs were clients of Executive Speaking, Inc., the coaching firm of lead author Anett Grant.

"We discovered some pretty significant gaps between how they perceived themselves as speakers versus how they actually were," Grant said. "CEOs just aren't as self-aware as they may think, at least with regard to their speaking skills."

Strong impromptu speaking skills have become extremely important in today's world of social media and 24-hour news. A five-second, off-the-cuff comment can have ramifications that last for years. Could greater awareness of speaking strengths and weaknesses help prevent these faux pas? Grant thinks so.

"CEOs need to realize that they can't just say whatever comes into their heads. They need to learn skills that give them thinking time while they speak, so that they can edit their thoughts without hesitating — and project positive energy at the same time," Grant said.

But it's not just about faux pas — the "always-on" nature of today's business world means CEOs must be prepared to give smart comments immediately.

"It's not enough to know your stuff and rely on scripted speeches," Grant said. "Whether it's a discussion with the board, a town hall, or a media interview, it is absolutely essential for CEOs to master key skills to excel at impromptu speaking."