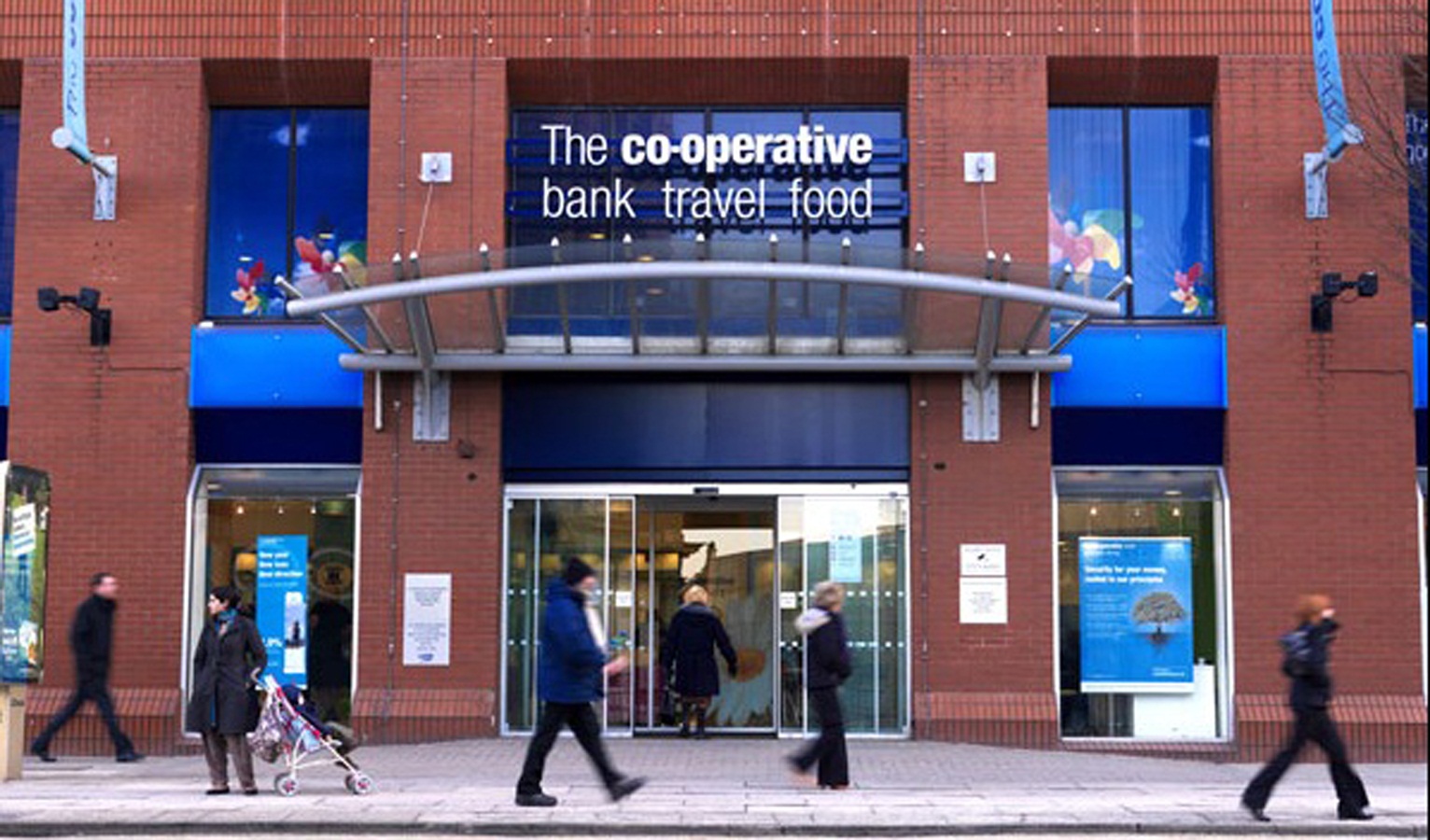 I joined the Group in the summer of 2013 as your Interim Finance Director, and have since taken on the role of Interim Chief Executive. At both points, the Group faced a crisis. This annual report goes some way to explaining how this happened, and what we intend to do about it. It is in the nature of business that crises do occur, and need to be fixed. A large part of my career has been spent in similar situations, having arrived at moments of crisis in six other organisations. Whilst the issues at the Co-operative Group need urgent attention, it is clear to me that with the right, decisive action we can once again restore the Group to financial health. That action will include the need for fundamental reform of the way the Society is governed, if the Group is to be able to navigate successfully the issues that a business of its size and complexity faces. With the continuing support of our Members and colleagues, the Executive team now in place will make that happen.

Equally as important, we need to redefine the fundamental purpose of the organisation. The credibility, trustworthiness and financial strength of the Group built up over nearly 150 years have been stripped away over the past five years. And yet if ever there was a time for the revival of a campaigning organisation owned by its Members, all of whose profits can be put to work in the communities where they live, it is now.

In the detail of our annual report, we provide commentary on the performance of each of our key businesses, some of which performed adequately in 2013. The year itself, though, will always be remembered for an overall statutory comprehensive loss of £2.487bn (2012: loss of £529m). The scale of this disaster will rightly shock our Members, our customers and our colleagues.

The loss arose principally from three causes. Firstly, the continuing losses reported by the Bank as a result of the impairment of corporate loans, conduct issues and failed computer development projects. Secondly, the write-off of our accumulated 115 year investment in the Bank following its emergency recapitalisation, in which we participated but in the process saw our shareholding fall from 100% to 30%. And thirdly, a partial write-off of the goodwill created on the 2009 acquisition of the Somerfield food business following a strategic review of that business.

Whilst 2013 was disastrous for the Group, when set in a longer term context we also have to recognise that underperformance has characterised the past few years. Our Bank also posted heavy losses in 2012 (loss before tax £673m), whilst Trading Group Operating Profit is down 71% over the past three years. Additionally, just under £1.3bn of one-off costs and charges have been recorded over the past five years. The classification of these charges as “significant items” signalled that they were non-recurring, or one-off in nature, but even in 2009 when the lowest level of charges were recorded they totalled over £100m.

Whilst the near-failure of the Bank was a disaster, Members can take some pride in the rescue response by the Group. Had the Bank failed, the consequences would have been far reaching. Current account holders and savers may well have been inconvenienced in accessing their money for a period of time, whilst those saving above the level at which the government provides protection may have faced losses on their savings. Small business customers may have been starved of vital liquidity and there could well have been contagion risks to other small financial institutions. Additionally, the many retail bondholders in the Bank who depend upon their investment with us to provide a pension income would have lost everything. And the effects would not have been limited to the Bank – the impact of cross default provisions in certain of the Group’s borrowing agreements, had they not been addressed, would have put the whole Group at risk of going into administration.

Over a six month period, we worked hard to put in place a solution to save the Bank, and this concluded in December. It was the first rescue of a European Bank since the Banking Crisis began that did not involve recourse to the taxpayer. It required the Group to contribute well above its ‘fair share’ of the rescue funding, in particular in order to protect small bondholders. Without question, this was the Co-operative Group ‘doing the right thing’. In addition, we ensured that, for the first time, the Bank has its ethical agenda enshrined in its constitution. This was vital, given that we were unable to retain our 100% ownership of the Bank. Through this mechanism, we can ensure that the Bank operates in a way that is true to its name, and if this were ever to change, it can no longer call itself the Co-operative Bank.

The operational separation of the Bank from the Group is underway – it is both complex and costly. This is an unfortunate consequence of an ownership change that was never planned for. During the intense and protracted period where key Executives were absorbed with saving the Bank, we were fortunate to have colleagues throughout the wider Group who stuck to the task of delivering for their businesses and their customers. You can learn more about their performance in the business review.

The Group’s balance sheet reflects the recent history of poor results. Debt has risen from £0.6bn five years ago to £1.4bn at 4 January 2014.

At this level, most Group debt ratios are adverse to those recorded by listed company peers, reflected in our sub-investment grade credit rating of B+ awarded by Standard and Poor’s in January 2014. Group debt did in fact reduce by £286m in the year, but as a result of business disposals and a sale and leaseback of the Group’s new head office (itself another form of debt) rather than through solid cash generation by our businesses.

The Group’s balance sheet also reflects the accumulated legacy of obligations taken on in the past, but now holding back our financial progress.

The onerous lease provision of £197m (with over rented provision and holding costs of £232m),  included within note 26 to the accounts reflects an allowance for future rents on 645 units nationwide that are not in use by the Group, but where we have the rental obligation. The net rent liability for these properties through the full term of their leases totals £443m, and we have to work hard to mitigate that by finding sub-tenants for all this surplus property, itself the size of a national retail business.

We reduced the goodwill recorded on the balance sheet relating to the Group’s acquisition of Somerfield by £247m (£226m impairment and £21m relating to 2013 disposals) reflecting our change in strategy for the Food business. By the conclusion of the True North programme, over 60% of the store space acquired in the Somerfield transaction will have been divested by the Group.

We have stabilised the Group, with the support of many stakeholders, and we are ready to begin the process of recovery, but the deep, sustainable change needed is only deliverable with governance reforms. As Ursula mentions in her report, a combination of the Kelly Inquiry and the Myners Review will help us to ascertain where failings have arisen and what needs to be done to address them. This will be painful for those concerned, but there will be no sugar coating.
Whilst we await the detailed reports, it is clear that they will reveal major failings of governance, leadership and accountability. Eighty seven thousand colleagues and 8.1m Members will look to the Group Board, our Regional Boards and the independent societies for an appropriate response.

Our short term plan for the Turnaround Phase is simple. We need to invest in our retained businesses, and operate them effectively in highly competitive markets. We need to reduce a bloated cost base in order to generate cash for that investment and to enable us to reduce our levels of debt. And finally we need to ensure that we generate good proceeds from the businesses that are for sale in order to accelerate further the necessary debt reduction. All of these activities are under way. In our largest business, Food, the True North strategy announced last year is bearing fruit, and we have seen a sustained period of market outperformance. We have also begun a rigorous programme to take costs out of the business. Whilst there will be difficult decisions ahead, we have made a great start, identifying a budgeted £100m of savings by the end of 2014, with much more required.

The transformation phase of our recovery is ready to begin. A new Executive team is in place and leading the way. Over many months, a detailed review of all our businesses has been undertaken, and plans developed for each. Additionally, a fundamental review of the Purpose of our organisation has been undertaken. Whilst we have no automatic right to exist, it has confirmed to us that in the 21st Century, just as in the 19th, we should have a place in the communities of the United Kingdom. The work has been undertaken co-operatively with the Group Board, with extensive input from colleagues, Members, customers and the general public.

It has been further informed by the Have Your Say poll, conducted on our behalf by YouGov and representing one of the largest such consultations ever undertaken. Over 180,000 people responded and the results are currently being analysed. At the heart of our Purpose will be our determination to be distinct, remain true to the essence of our Co-operative roots and deliver for our Members, customers and the communities in which they live.

We know we need to make that meaningful to everyone who cares about the Co-op.

When I look back over the last year, while the problems created by a few have made the headlines, the quiet determination of the many gave us much to be proud of. First and foremost, our colleagues worked tirelessly for our customers and Members. In return, they have shown us huge loyalty. I thank them all.

The Group is now very publicly at a crossroads – past mis-management means we lost our way, but we will revitalise our Purpose, improve our commercial operations and rebuild belief in the Co-op. Whilst I am not going to reveal the results of the Have Your Say poll here, I can make clear that we still enjoy the goodwill of the nation, and they are urging us to succeed. We have a huge job ahead of us – transforming this organisation will take at least four years and the path will not always be smooth. Through all the events of the past year, however, I have never lost my faith that this is a great business that holds a special place in the hearts and minds of people in communities up and down the United Kingdom. This country needs a strong Co-op and that is what the management team and I are determined to deliver.

Thank you for your support.