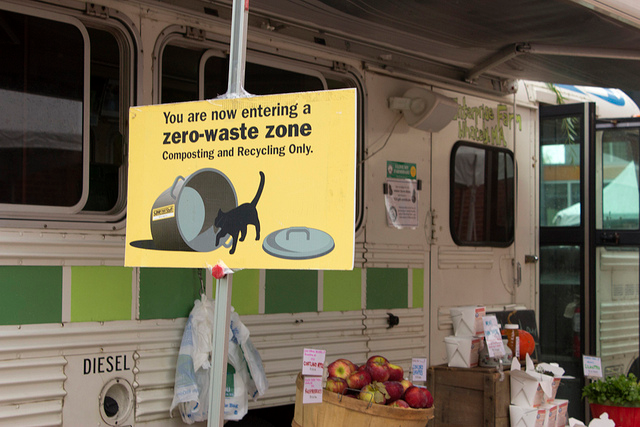 Haste Makes Waste—So Do Restaurants (But Not This One)

No matter the end result of any process of creation, waste is an inevitable by-product. When a builder puts up a house, she’s left with scrap wood for which there is no use. When an artist paints a landscape, he’ll inevitably toss many of the colors he mixed up on his palette. And when the US tries to create a new president, they end up with Donald Trump. Waste is unavoidable. As if to put a fine point on this concept, humanity invented the restaurant industry. The average dining establishment generates eight gallons of waste every hour, and until society gives these businesses a reason to dial back their trash production this number may only get worse. This is especially true of the businesses in the industry’s fastest growing sector, the fast-casual restaurant. Reusable dishes are eschewed in favor of paper or foil, or served in a to go box. And while these vessels may be recyclable or even compostable, there’s no way to know whether these things are happening “downstream”— plus there’s still a trail of waste attached to their very production. But, what are you going to do, right? It’s just an unfortunate consequence of business, no way around it, and so we can just hope businesses mitigate the problem as best they can.

There’s a cafe in Chicago that’s challenging the very notion of waste as a necessary evil in hospitality. It’s called Sandwich Me In, and it’s the brainchild of Justin Vrany—a man with a passion for good food and environmental responsibility. The shop serves up carnivorous and vegetarian food, all made with ingredients from local farms, at a price point that’s completely in line with the fast-casual/quickserve landscape. Furthermore, he personally oversees the composting and recycling of everything his customers throw away—to ensure that it’s done right. The compost goes right back to the farms and gardens that grow his food; plastic bottles and metal containers that some of his ingredients come in go home with him, where it’s sorted and then delivered to a recycling facility. It’s a lot of time and effort to make happen, and he keeps his costs down by doing it himself. But still, there’s always going to be garbage. When confronted with actual trash—non-recyclable, non-biodegradable trash—Vrany did any committed environmentalist would do. He hung on to it and kept it from the landfills. And after two years in business, he finally found himself with an 8-gallon bag of the stuff. For those of you keeping score at home, that two years worth of trash is the same as a hour’s worth from an average restaurant. At eight gallons, though, there was finally enough trash to do something with it. He gave it to an artist who created a sculpture out of it, and Sandwich Me In officially became a zero-waste restaurant. So to all you non-believers out there: it CAN be done. At Kounta, our restaurant pos, helps you easily understand what items are doing more harm than good.  Track what’s not being sold, and find the real cost of damaged COGS to your costs and revenue.

In perusing through Sandwich Me In’s website to get more information on how Vrany keeps his waste to a minimum, I learned one thing very quickly. He shut the whole operation down back in April. On his blog, Vrany stated that the decision was a personal one—he wanted to spend more time with his wife and kids. This makes sense when you consider how much time he spent not at the restaurant still doing the chores needed to fulfill its mission of sustainability. But it’s also a little upsetting that for a restaurant to be sustainable, its owner’s life can’t be. Though he stated in his announcement that SMI operated in the black every month of its existence, that doesn’t give a full picture of its cash flow. If you end a month with one more penny in revenue than you spend in overhead, you’re in the black. But you still can’t afford to hire someone else to help out with all the extra work that your sustainable restaurant requires. I don’t know that’s what Vrany was dealing with, in terms of the money situation, but if you watch this video about SMI you can see very clearly how much of his time is spent on his labor of love.

The good news is that Vrany is calling it a temporary farewell, and promising that the restaurant will reopen at some point with “a different spin.” Let’s hope whatever lessons learned the first go round help to make the next incarnation more viable. It would be a shame if his efforts turned out to be a waste.

Dave Eagle is a writer and photographer, but necessarily not in that order. For the past few years, he’s been writing about point of salefor Kounta.  A Cloud based restaurants, bar, cafe & coffee shop POS. He lives in Vermont, USA, but has prose in different area codes.