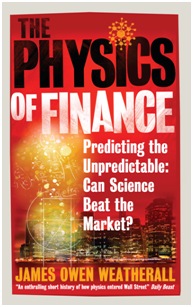 The Physics of Finance Predicting the Unpredictable: Can Science Beat the Market?

After the economic meltdown of 2008, many pundits placed the blame on ‘complex financial instruments" like derivatives, and the physicists and mathematicians who dreamed them up. But a young academic named James Owen Weatherall quickly began to question this narrative. Were the physicists really at fault?

In this important and engaging book, Weatherall tells the story of how physicists came to Wall Street and how their ideas changed finance forever. Taking us from fin-de-siècle Paris to Rat Pack-era Las Vegas, from wartime government labs to Yippie communes, he shows how physicists successfully brought their science to bear on some of the thorniest problems in economics, from options pricing to bubbles. But models—whether in science or finance—have limitations; they break down under certain conditions. And in 2008, sophisticated models fell into the hands of people who didn’t understand their purpose, and didn’t care. It was a catastrophic misuse of science.

The solution, Weatherall argues in this brilliantly entertaining book, is not to give up on models; it is to simply make them better.

James Owen Weatherallis a physicist, philosopher, and mathematician. He holds graduate degrees from Harvard, the Stevens Institute of Technology, and the University of California, Irvine, where he is presently an assistant professor of logic and philosophy of science. He has written for Slate and Scientific American.’

FURTHER PRAISE FOR THE PHYSICS OF FINANCE:

"A compelling case for models in economics and an important book for anyone who embraces the scientific method for improving the lot of mankind." —Michael Brown, former CFO of Microsoft Corporation, past chairman of NASDAQ

"Weatherall probes an epochal shift in financial strategizing with lucidity, explaining how it occurred and what it means for modern finance." —Peter Galison, author of Einstein’s Clocks, Poincare’s Maps

"Weatherall’s rollicking tale of science and profit has relevance to us all. He goes beyond the ‘Frankenstein’s monster’ cliché to argue that mathematical models are an essential foundation of a saner future.” —William Poundstone,
author of Fortune's Formula

"This book will lead you to reexamine what you thought you knew about the financial markets, and why it is so important for the economists to actually listen to what the physicists have been trying to tell them." —Bill Maurer, director of the Institute for Money, Technology and Financial Inclusion, University of California, Irvine

"Weatherall has a rare talent for making the complex comprehensible, and he puts it to excellent use explaining the role of physics and mathematics in financial markets. This is a book anyone concerned with the unforeseen consequences of financial innovations will want to read.” —Lee Smolin, author of The Trouble with Physics

"Beautifully written, with clarity, understanding, and a broad view that is rare in these domains. Even those of us who are unconvinced physics has played an important role in finance will be carried along and learn from this engaging book."
—Stephen M. Stigler, Ernest DeWitt Burton Distinguished Service Professor of Statistics, University of Chicago

"James Weatherall channels the sheer intellectual excitement of unlocking the secrets of nature, whether they relate to fundamental particles or financial markets." —Hans Halvorson, professor of philosophy, Princeton University

" James Weatherall has announced his arrival as one of our leading young science writers. This smart, fast-paced history of ideas—which is packed with vivid portraits of brainiacs famous and obscure and offers a provocative analysis of our current economic woes—should appeal to a broad range of readers, from hard-core science junkies to business folks trying to make sense of modern finance." —John Horgan, Director, Center for Science Writings, Stevens Institute of Technology