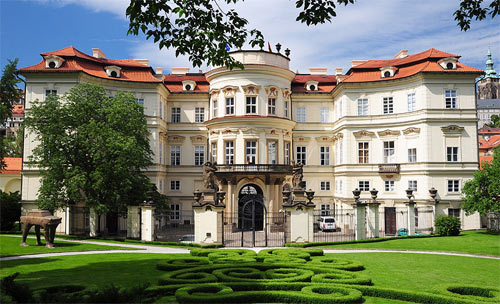 Weinhold Legal advised the Federal Republic of Germany and the German Embassy in Prague on the contemplated acquisition of the Prague-based Palais Lobkowicz, the seat of the German Embassy, from the Czech state. Following negotiations the parties agreed instead of a transfer on a long-term lease of the building by Germany.
Since 1974 Palais Lobkowicz is the seat of the German Embassy in Czech Republic. In 1989 the building was an important scene of European history. Thousands of East Germans fled to West Germany via Prague and, thus, paved the way for German reunification. This event marks its 25th anniversary these days.
"Especially due to the historical significance of this building, we were very proud to support the Embassy on this transaction" said Thilo Hoffmann, the responsible partner at Weinhold Legal. Weinhold Legal had been the winner in the German Embassy´s tender for legal advice. The events at the Palais Lobkowicz are considered the most important precursors to the fall of the Berlin Wall. The former German Foreign Minister Hans-Dietrich Genscher announced on September 30, 1989 on the balcony of Palais Lobkowicz the exit opportunity for almost 4,000 East German refugees. The communist system in East Germany and Czechoslovakia bcollapsed shortly afterwards and paved the way for free elections and a democratic society.

The baroque palace, which was built in 1702, was owned by the Bohemian noble family Lobkowicz since 1753. Ludwig van Beethoven and Carl Maria von Weber gave concerts in the domed hall of the Palais. In 1927 the Lobkowicz family sold the building to the Czechoslovak state.