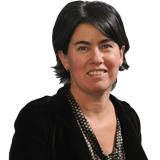 She was part of the team advising the Government during the 1995 banking crisis in Argentina in which the Fondo Fiduciario de Capitalización Bancaria was created.

In 1998 and 1999, she worked for the firm Linklaters, London, specializing on project finance.

She graduated as a lawyer at the Universidad Católica Argentina in 1995 and obtained a Master in Law at Duke University in 1998.