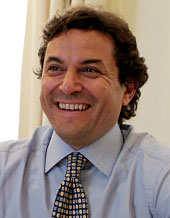 Claudio Tesauro has been executive partner of the Rome office of Bonelli Erede Pappalardo since the merger in 1999. He is the head of the antitrust department which has lawyers based in Bruxelles, Rome, Milan and London.

Claudio Tesauro's antitrust experience began in 1989 as a trainee at the Legal Service of the European Commission, where he was primarily involved in antitrust litigation before the European Court of Justice. He was called to the Naples bar in 1991, the youngest lawyer to do so that year. He subsequently entered private practice, becoming one of the founding partners in 1992 of the law firm Tizzano-Pappalardo. He became the youngest partner of Pappalardo e Associati, specialising in EC competition law. In 1999 this firm merged with two other Italian law firms to become a leading law firm in Italy, Bonelli Erede Pappalardo.

Claudio Tesauro specialises in EU competition law, and has acted in several high profile cases, notably in the telecommunications, energy sectors, postal and several industrial. He regularly appears before the Italian antitrust authority, the European Commission and national courts. He was one of the first lawyers to represent companies before the Italian antitrust authority. In addition to having extensive experience in the general issues of EU and competition law, Claudio Tesauro handles merger cases and investigations under the Italian and EU merger rules.

Claudio Tesauro is president of Save the Children Italy and the Italian Antitrust Association (AAI).

Claudio Tesauro was the holder of the Jean Monnet Chair at the University Institute S Orsola Benincasa of Naples and has written extensively on EU and Italian competition law.