English and Welsh graduates who took out a student loan since 2012 are in for a rollercoaster ride on student loan interest rates in the coming years. Today’s reading for RPI inflation means that the maximum interest rate, which is charged to current students and graduates earning more than £49,130, will rise from its current level of 4.5% to an eye-watering 12% for half a year unless policy changes (the interest rates for low earners will rise from 1.5% to 9%). This means that with a typical loan balance of around £50,000, a high-earning recent graduate would incur around £3,000 in interest over six months – more than even someone earning three times the median salary for recent graduates would usually repay during that time.

This interest rate rollercoaster will cause problems. The way the interest rate cap currently operates disadvantages borrowers with falling debt balances for no good reason. Perhaps more importantly, sky-high interest rates may put some prospective students off going to university; some graduates will likely feel compelled to pay off their loans even when this has no benefit for them. 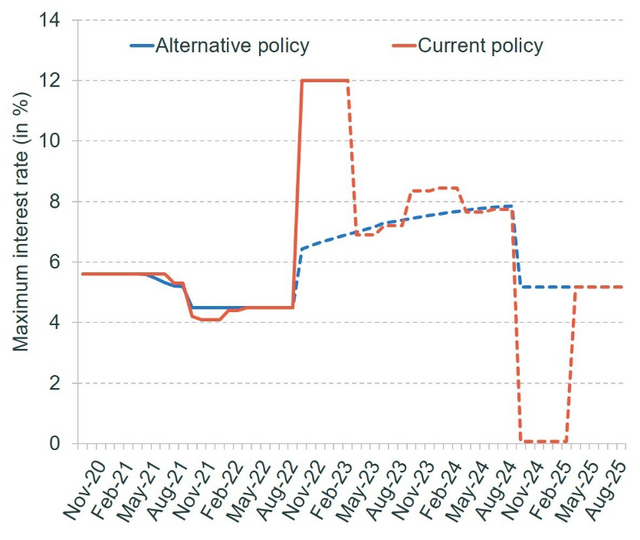 Why Is This Happening?

This high reading implies an eye-watering increase in student loan interest rates to between 9% and 12% (see chart). That is not only vastly more than average mortgage rates, but also more than many types of unsecured credit. Student loan borrowers might legitimately ask why the government is charging them higher interest rates than private lenders are offering.

In fact, there is a little-known legislative provision that was meant to avoid precisely this situation. By law, student loan interest is not allowed to rise above interest rates “prevailing on the market”. Roughly speaking, the Department for Education (DfE) interprets this as requiring a cap on student loan interest at the average interest rate on unsecured commercial loans (the ‘Prevailing Market Rate’).[2] The latest Prevailing Market Rate for February 2022 is 6.0%.

First, there is a lag of around two months between when market interest rates are measured and when they are published by the Bank of England. Second, the DfE applies the cap on a three-monthly basis rather than monthly: it waits until student loan interest rates have been above the cap for three subsequent months and then adjusts them downwards by the three-month average amount by which the cap was exceeded. This adds another two-month lag. Finally, there is a two-month implementation lag between the DfE acting and the interest rate being applied to borrowers’ accounts.

The red line in the chart above (labelled “Current Policy”) illustrates what all of this will mean for maximum student loan interest rates over the next few years, assuming that the OBR’s March 2022 forecasts for inflation and interest rates prove correct.[3] The delayed implementation of the interest rate cap over a two-year period leads to the rollercoaster pattern shown. However, current policy does ensure that periods with interest rates above the cap are precisely counterbalanced by lower interest rates in later periods.

Why Is This A Problem?

Conversely, borrowers whose loan balances are falling over time will typically lose out from the delay in implementing the repayment cap, because they will be charged a higher interest rate when their loan balance is high and a lower interest rate when their loan balance is low. A special case of this are borrowers who fully repay their loans after the repayment cap kicks in but before the ‘overhang’ period when student loan interest is no longer above the cap but the interest rate is still being reduced. These unfortunate borrowers will lose out from the delay but will not be compensated in any way later on.

This arbitrary redistribution will be quite substantial. For example, a current student receiving both maintenance and tuition loans might see their loan balance rise by £20,000 between March 2023 and September 2024. Due to the delay in applying the cap, this student would have a loan balance around £600 lower in March 2025 than if the cap had come in immediately. Conversely, a high earner who reduces their loan balance by £10,000 over the same period will end up with a loan balance around £400 higher than if the cap had been applied immediately. Such large redistribution between graduates due to implementation lags is unfortunate and would seem to go against the spirit of the legislation.[4]

However, the impact of this on actual repayments might be quite limited, as most graduates from the 2012 to 2022 university entry cohorts are unlikely to ever clear their loan balances (whether or not the interest cap is implemented with a delay). Even the minority of mostly high-earning students who will fully pay off their loans will typically only be affected in their late 40s or early 50s. Only very few graduates’ budgets will be impacted in the next few years.

A different issue is probably more important. The ‘student loans interest rollercoaster’ may lead current and prospective borrowers who do not fully understand the highly complex student loans system to make decisions that are not in their best interest.[5] Current borrowers may spend large sums on paying back their student loans early to avoid sky-high interest rates, unaware that they will be compensated by lower interest rates later or even that their loans will be written off with no adverse consequences after 30 years. Some prospective students may be put off from going to university altogether.

What Can Be Done About It?

One such policy is shown in the chart (blue line). This policy caps student loan interest rates at the Prevailing Market Rate from four months before student loan interest is charged. That would allow for the two months it takes the Bank of England to publish the relevant data, and the two months it takes for any interest rate reduction to be implemented.[6] While using data from four months earlier means that the implemented cap will differ from the real-time cap to an extent, the Prevailing Market Rate by the DfE’s definition changes sufficiently slowly for these differences to be minor.[7]

However, it would be easy enough to adjust later student loan interest rates to ‘even out’ any historical differences between the interest rate charged and the real-time cap. The adjustment required would be so much smaller than under current policy that it would barely be noticeable for borrowers. Arbitrary redistribution would still happen, but would at most be in the tens rather than hundreds of pounds.

More important than these details is that the government does act quickly. Current policy is deeply flawed and there is little time left to fix the system before the big rise in interest rates that is pencilled in for September. Given implementation lags, the government has around three months to come up with a better plan.

[1] For borrowers with postgraduate loans, the interest rate is normally the rate of RPI inflation plus 3% regardless of a borrower’s earnings; otherwise it is determined in the same way as for undergraduate borrowers.

[3] Our forecast for the Prevailing Market Rate uses the same methodology as the OBR forecast but incorporates more recent outturn data up to February 2022 from the Bank of England.

[5] As set out above, prospective university entrants in the next few years will in reality benefit from the lag in the repayment cap that causes the “interest rate rollercoaster”, because their loan balances will be rising over the relevant period. However, few prospective students are likely to realise this.

[7] More generally, there is little reason why using data from four months earlier should not be acceptable to determine the cap: after all, current policy already uses inflation data to determine student loan interest rates that is a year and a half out of date by the end of the academic year.