Industry estimates project the market size of the Indian automobile sector to reach US $300 billion by 2026, registering a significant growth from the existing US $118 billion in 2020.

Additionally, the automotive sector contributes 7.1% to India’s gross domestic product (GDP) and employs a workforce of 37 million. The Automotive Mission Plan 2016-26 (AMP) envisages to raise the sector’s share in GDP to 12% and create employment opportunities for over 65 million people.

Over the past few years, four specific regions in the country have emerged as large automobifle manufacturing clusters.

Some of the leading players in India’s automobile industry are Tata Motors, Maruti Suzuki, Mahindra and Mahindra, etc. Leading foreign players, including Kia Motors and Volkswagen, have customized their products in terms of traditional structure and designs to cater to the large Indian middle-class population. This is essential for them to compete directly with domestic firms as the sector is highly competitive.

Tata Motors introduced the Ace Gold Petrol CX in July 2021, which is India’s cheapest and most compact commercial four-wheeler vehicle, starting at INR 3,99,000 (US $5,362).

Hyundai too entered a strategic alliance with shared mobility company, Revv, in 2018, under which it intends to provide cars on subscription in six cities in India. This will provide customers the opportunity to use Hyundai’s models with hassle-free ownership and limited commitment.

The Indian automobile sector is categorized into four segments: 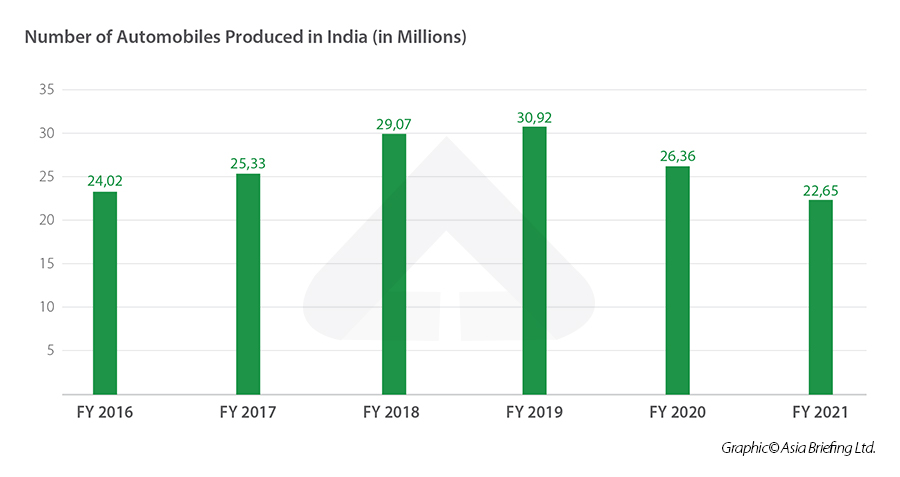 Simultaneously, a similar analysis of domestic annual sales of automobiles in India shows a CAGR of 1.29 percent. While the annual sales figures stood at 20.47 million in FY 2016, they peaked in FY 2019 at 26.27 before slumping to 18.61 million in FY 2021. However, the industry estimates look promising as the first quarter (Q1) of FY 2021-22 witnessed a 113% growth in the total domestic sales of vehicles. In June 2021, sales volume of passenger vehicles in India stood at 231,633 units. 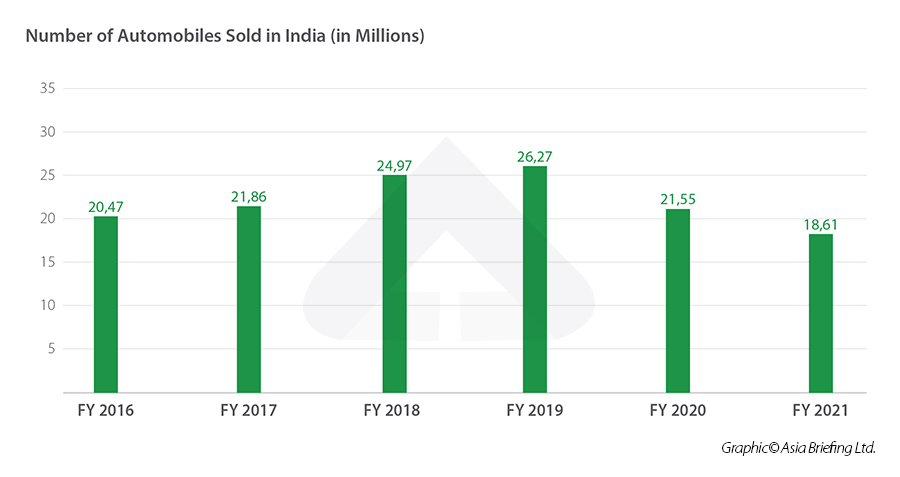 As per June 2021 statistics, Hero MotoCorp and Honda Motorcycle and Scooter India (HMSI) surfaced as the top two players in the two-wheelers segment, with 44.65% and 21.14% market shares, respectively. Hero MotoCorp Ltd. recorded sales of 415,366 two-wheeler units in June 2021.

Bajaj Auto emerged as the leader in the three-wheeler passenger category with 33.43% market share in June 2021, followed by Piaggio vehicles claiming a share of 15.33%. Bajaj Auto’s three-wheeler sales stood at 4,925 units in June 2021.

The luxury vehicle segment is expected to rebound in FY 2022, likely propelled by the introduction of new luxury products in 2021, which presently line up to a total of 70 new launches. New products include 25 new units by BMW, 15 units by Mercedes Benz, 10 units by Jaguar Land Rover, seven units by Audi, five units by Volvo, and the remaining from manufacturers like Rolls Royce, Lamborghini, Ferrari, and Porsche.

According to industry projections, the Indian automobile industry is expected to record strong growth in FY 2021-22, suggesting a swift recovery from the COVID-19 pandemic.

Electric vehicles, especially electric two wheelers, are likely to witness positive sales in FY 2022, given the persistent push by both the central as well as state governments for a transition towards cleaner mobility in India, including the most recent production-linked incentive (PLI) scheme for the automobile sector to boost the manufacturing of electric vehicles and hydrogen fuel cell vehicles.

According to an independent study by CEEW Centre for Energy Finance (CEEW-CEF), the EV market in India will be a US $206 billion opportunity by 2030. This will necessitate a US $180 billion investment in vehicle manufacturing and charging infrastructure.

Opportunities In The Indian Automobile Sector

According to AMP 2016-26, India is expected to emerge as the third-largest automotive market in the world in terms of volume by 2026, followed by China and USA.

The foreign investors have a huge opportunity as India allows 100% foreign direct investment (FDI) in the sector under the automatic route, making it attractive for investors to set up their manufacturing units in India. The cumulative FDI equity inflow during April 2000 to June 2021 in the automobile industry is US $30.52 billion. This constitutes 5.58% of the total FDI inflow received across sectors.

Several ongoing projects that can interest potential investors include the US $13.56 million Automotive Manufacturing Unit in Lucknow, Uttar Pradesh.

The Indian auto component industry is a critical part of the original equipment manufacturer (OEM) value chain and has grown at a healthy pace over the past few years. The turnover of the auto components industry grew at a CAGR of 6% from FY 2016 to FY 2020. In the same period, domestic sales grew at a much faster pace of 9.6% CAGR.

As per industry estimates, FY 2022 is expected to witness a positive growth of 18 to 20 %, after two consecutive fiscals of de-growth as the newly introduced PLI scheme as well as the FAME II scheme will encourage investments in the industry.

Furthermore, the upgradation in the emission standards from Bharat Stage (BS) IV to BS VI norms will place the industry at par with international regulatory standards on safety and emissions, by significantly reducing the vehicular emission of air pollutants.

The organized segment of this industry includes OEMs who are involved in the manufacture of high-value precision instruments, while the unorganized segment comprises of low-valued products catering to after-market services. The various sub-sectors of the auto component industry in India are:

Among key challenges faced by Indian component manufacturers is the low-level of technology penetration and negligible research and development (R&D) capacity. According to an ICRA report released in September 2021, while the long-term growth drivers look resilient, short-term challenges like commodity inflation and semiconductor shortage persist.