Bilateral trade set to grow at US$5.6 billion per annum from 2022-2028 leading to tremendous opportunities for UAE and Indian exporters.

Trade between the Indian peninsula and the Arabian Gulf has been a dominant feature of the world trade picture since Antiquity. Typically, precious metals from the Mediterranean would be exchanged for spices or silk found India at a rate of c.120 ships/year under the Roman Empire. Avoiding the Parthian Empire’s control (in modern-day Iran) on trade to India, many traders made a larger profit going by sea and stopping at ports in the Gulf states. The UAE and India are today’s keepers of such an esteemed tradition of free trade.

The Importance Of The Indian Diaspora In The UAE

3.5 million Indians live in the UAE (close to 40% of total population in the UAE, not counting those from neighbouring Pakistan and Bangladesh) and typically furnish most of the labour for the UAE’s energy industry as well as construction or logistics sectors. This interdependence – labour for UAE, remittances for India – is the foundation of today’s relationship between the two countries.

A Wide Range Of Partners

The UAE’s trading tradition – evident through its numerous free ports such as Dubai – has resulted in a balanced and mutually beneficial trade picture that is not over-exposed to a single geopolitical power. The UAE has hedged against China’s geopolitical ambitions through trade with more US-friendly and multilateral India, EU and Japan. Within this trio – and wary of India’s own complicated foreign policy balancing act – the share of trade with India, EU and Japan’s share of trade all oscillates at around 10%.
Finally, the local influence of Saudi Arabia, key in political circles of the UAE, is dwarfed by the importance of the aforementioned foreign trade partners.

While the world’s financial centre remains the West and the United States in particular, trade data for the UAE shows its interests here lie clearly with the East – worth here a combined US$180 billion – compared with the meagre US$46 billion (9% of total trade) turnover that the EU represents.

India is second only to China in terms of turnover but is the UAE’s top export partner, responsible for US$40 billion or 17% of total exports. In comparison, exports to China are lower by roughly a third, accounting for US$27 billion or 11% of the UAE’s total. Both India and China are energy-hungry superpowers that the UAE caters though the former’s geographical proximity likely explains the higher figures.

97% Of UAE Tariffs Dropped For India

The UAE-India Comprehensive Economic Partnership Agreement (CEPA) came into force on May 1, 2022, and is aimed at lowering tariff and non-tariff barriers (especially eliminating complicated customs procedures) and consolidating a single set of rules and regulations. More details concerning this agreement and the benefits for UAE and Indian businesses can be read here.

According to CEPA projections, the reduction of duties and non-tariff barriers is likely to smoothen trade and the frequency of exchange to increase such that overall turnover reaches US$100 billion.

Diversification On The Cards

Interestingly, the energy sector is not included in this trade deal and focus has been placed on diversifying exchange, namely that of services, digital trade and government procurement. It has also looked at improving the place of Small and Medium Enterprises in trade between the two countries and is indeed a very promising agreement for both sides.

The recent CEPA deal does not touch FDI rules that were set up in 2013 with the BIT. The BIT fostered a prosperous investment climate especially with regards to protection of bilateral investment, expropriation risks and the removal of any capital controls. 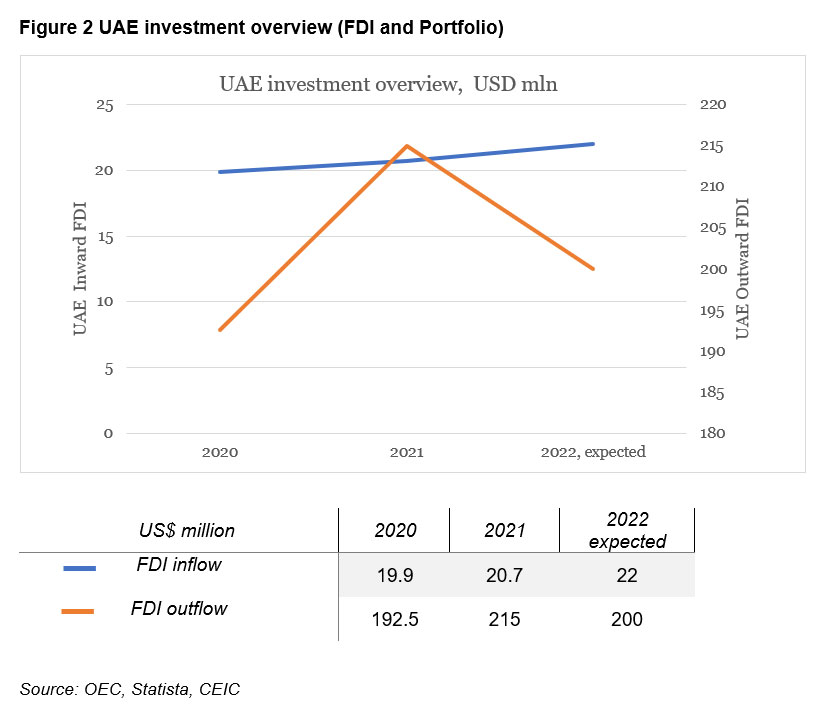 Following a Covid-related slowdown of FDI causing investors to rethink their strategies –increasing trends towards near-shoring and not stretching supply chains too thinly – the UAE has retained attractivity as a business hub. Per local media, the UAE government aims to go for 6% growth/year for the next decade and high FDI scores will be key to this (see Fig. 5). Following normalisation of diplomatic relationships, Israel is viewed as one of the of the most promising sources of investment along with tech-savvy South Korea.

A Clear Exporter Of Capital

A cash-rich economy, the UAE is the top MENA foreign investor as the UAE leadership tries to use its petrodollars wisely and tap into future growth and cash-flow across the region. This is an increasingly important hedge against the energy exporting model of development the UAE has chosen. That said, considering the volatile market conditions we are likely to face it is not clear that FDI outflow for this year will surpass the last.

Whether in calendar or Financial Year terms, 2021 was a regrettable year from the point of view of India-UAE trade. Trade YTD has increased over one-third across the board, though the balance of trade has increased in favour of the UAE by a factor of two.

The latter’s energy resources are needed to maintain Indian productivity and in dollar terms the UAE’s comparative advantages are more solicited than what India can bring to the table. That said, the Indian population of the UAE – mentioned above – may be cheap but its importance in terms of volume is absolutely key: with only 11% of the population of the UAE actually local citizens, its economy would grind to a halt without its Indian workforce vector.

It is also important to remember that a current account deficit is no danger unless it is run for a significant amount of time. The deficit in terms of trade in goods is immediately balanced in the capital account.

Trade Is On The Rise

Predicted at US$100 billion per the CETA as seen above, there is likely to be a quantitative and qualitative rise in trade between two countries. Assuming the same intra-year trends, trade with India will edge closer to the US$100 billion mark at US$80 billion dollars in 2023, of which 55% will be imports from the UAE. The balance of trade will continue to favour the UAE.

The recently announced cuts in oil production – at 2 million bpd – are likely to dent energy export figures to India. Even if the UAE is less sympathetic to this move on energy markets than Russia or Saudi Arabia, interests at least in the short-term lie with the cartel and the leadership of the UAE will have to act accordingly.

According to UAE official figures, non-oil trade for the year to date reached just under US$ 300 billion – a similar trend is likely to impact India-UAE trade and continue to push the trading numbers closer to their project mark for 2027, compensating for a fall in any energy exports.

Unlike the West on which it depends for defence and security, the UAE does not hold a Western-centric view of the Ukraine conflict and prefers strict neutrality. Indeed, the UAE and India consider the war and its geo-economic fallout as primarily a European problem that does not impact its interests – like the (ever so slight) majority of the world’s population located outside of the West that is not supportive of sanctions. Russian goods and services are not locked out of UAE markets per se, but only to the extent that local UAE market actors will increasingly have to choose access to Western markets or trade with Russia and China.

The most interesting feature of recent India-UAE trade has been the two countries’ mutual assistance in the form of trade with cheap Russian oil judged too toxic to European and North American markets. Subsidiaries of Russian oil firms established in the UAE have been settling orders for crude oil in RMB Yuan (but also UAE Dirhams) in order to feed demand the Indian refineries.

In short, it is the UAE bank that takes on the FX risk for both parties and underwrites this transaction. The liquidity of the RMB market means a Rupee-RMB swap is not hard to execute.

If the Russian Oil company subsidiary falls under sanctions, the alternative exists either for subsidiary to restructure or to sell the Oil to a number of local intermediaries – raising transaction costs in any case.

Executed in RMB Yuan, the transaction falls within the legal framework of the People’s Republic of China and should not fall under US or EU sanctions. It is the same principle with UAE Dirhams. That said, obstacles remain in practice and banks will increasingly have to choose between doing business with the East or the West – failing that, trade will return to being a prerogative of the state and this cannot be conducive to high-frequency economic exchange.

Use Of Mutual Currency Settlements

The UAE and India are also discussing mechanisms to use their mutual currencies in bilateral trade, reducing time and costs, according to the Indian Commerce and Industry Ministry. This comes as central banks globally are witnessing a depletion in forex reserves owing to the appreciation in the US dollar and rising oil prices in the backdrop of the Russia-Ukraine conflict.

India’s trade gap with the United Arab Emirates ballooned fourfold in the May-June period, the first two months since the India-UAE free trade agreement came into effect, driven by a jump in oil and gold imports. India’s trade deficit with the UAE widened to US$3.92 billion in the two-months from the US$980 million gap in 2021.

“An important area discussed was the creation of a mechanism for carrying out bilateral trade in national currencies. Referring to the ongoing discussions between the Reserve Bank of India and Central Bank of the United Arab Emirates on Unified Payment Interface (UPI) as a common digital payments platform, both sides agreed to continue discussions,” the Indian ministry stated.

India further informed that the UAE has sought tax incentives for certain UAE sovereign investment entities under the existing UAE-India Tax Treaty and both countries are exploring the establishment of efficient and integrated Single Window Solutions and Virtual Trade Corridors to reduce costs and time involved in trade and investment-related procedures.

UAE-India bilateral trade reached around US$72 billion in FY2021-22. An expected increase of that to US$100 billion – an additional US$28 billion – is expected to occur within the coming five years, indicating an average increase of US$5.6 billion per annum from now until 2027. These are significant figures, from which UAE investors may access by targeting India, and India investors can access by targeting the UAE.