The nation’s major retail container ports have begun to catch up with the backlog of cargo seen over the past several months, but could experience another surge this summer, according to the monthly Global Port Tracker report released today by the National Retail Federation and Hackett Associates.

“As we entered 2022, the biggest question was when the supply chain would return to normal,” NRF Vice President for Supply Chain and Customs Policy Jonathan Gold said. “Unfortunately, we still don’t have a definitive answer. Congestion at West Coast ports has eased, but congestion at some East Coast ports is growing. Ports aren’t as overwhelmed as they were a year ago, but they are still significantly busy moving near-record volumes of cargo.”

U.S. ports covered by Global Port Tracker handled 2.11 million Twenty-Foot Equivalent Units – one 20-foot container or its equivalent – in February, the latest month for which final numbers are available. That was down 2.3% from January but up 13% year-over-year.

Hackett Associates Founder Ben Hackett said volumes remained high in February despite factories in parts of Asia closing for the Lunar New Year holiday because U.S. ports were able to handle cargo from ships already waiting for a berth.

“With West Coast ports still congested, there were still plenty of containers to be unloaded,” Hackett said. Similarly, the current near-shutdown of Shanghai because of COVID-19 precautions means fewer ships are leaving China and “the wait on that side of the Pacific will help reduce the pressure of vessel arrivals at Los Angeles-area terminals.” An influx of vessel arrivals following the resumption of normal operations in China could result in renewed congestion at U.S. ports, however. 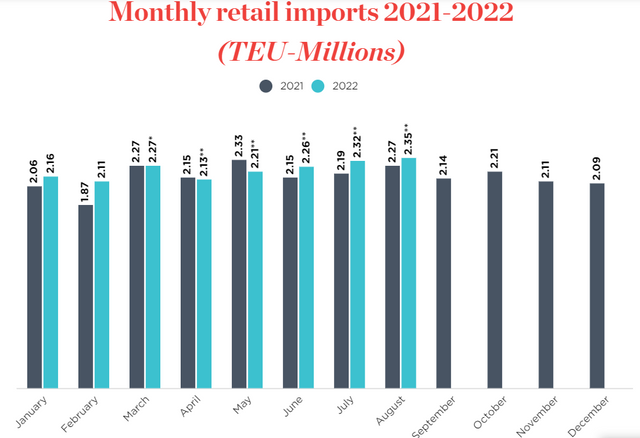 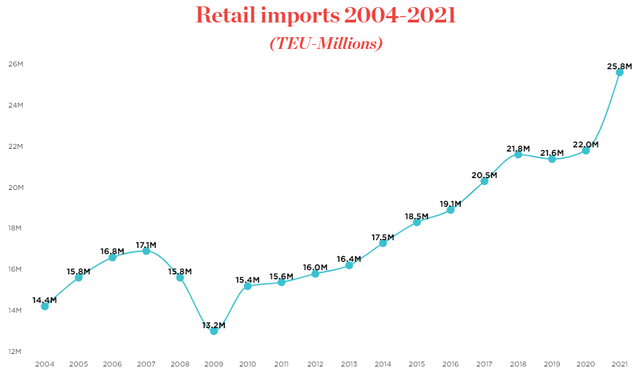 How to build a stronger and more sustainable supply chain will be addressed as retailers, industry experts and technology innovators meet at the NRF Supply Chain 360 conference in Cleveland in June.

Global Port Tracker, which is produced for NRF by Hackett Associates, provides historical data and forecasts for the U.S. ports of Los Angeles/Long Beach, Oakland, Seattle and Tacoma on the West Coast; New York/New Jersey, Port of Virginia, Charleston, Savannah, Port Everglades, Miami and Jacksonville on the East Coast, and Houston on the Gulf Coast. The report is free to NRF retail members, and subscription information is available at NRF.com/PortTracker.

About NRF
The National Retail Federation, the world’s largest retail trade association, passionately advocates for the people, brands, policies and ideas that help retail thrive. From its headquarters in Washington, D.C., NRF empowers the industry that powers the economy. Retail is the nation’s largest private-sector employer, contributing $3.9 trillion to annual GDP and supporting one in four U.S. jobs – 52 million working Americans. For over a century, NRF has been a voice for every retailer and every retail job, educating, inspiring and communicating the powerful impact retail has on local communities and global economies. www.nrf.com