What Is A Vaccine Passport And Will This Affect Business Travel To India?

A mere 100-nanometer coronavirus strain has put an unprecedented dent on global travel given the highly transmittable nature of the SARS-CoV-2 virus. Countries across the world, including India, have imposed extraordinary travel bans and restrictions, both international as well as regional travel. Whatever little transit is allowed has been followed up by stringent checks and procedural requirements like temperature check, mandatory RT-PCR, vaccination certificate etc., at all entry and exit points to prohibit the transmission of the contagious strain via human carriers.

However, with the pandemic wave receding in many areas, and given the ongoing vaccination drive, stakeholders are exploring safer solutions to resume global travel, including leveraging technology and AI in the pursuit of containing the spread, and reopen the world economy. One such innovation is the Digital Vaccine Passport. Many countries have already adopted different versions of the digital passport, while some, including India, stand firmly opposed to them, citing them as discriminatory, given the country’s low level of vaccination coverage.

The Technical Group of Global Tourism Crisis Committee, a United Nations body keen on restoring international mobility,  has called for the standardization, digitalization, and interoperability of testing protocols and certification systems, based on commonly agreed evidence and risk-assessment indicators for origin and destination country/territory. The vaccine passport, once implemented in the prescribed format can cater to these specifications, bringing uniformity in certification standards globally. Even the International Civil Aviation Organization (ICAO) has called for the need of vaccine passports.

What Is A Vaccine Passport?

A vaccine passport is a set of documentation verifying that a person has been vaccinated against an infectious disease, such as COVID-19. In the modern iteration, it is in the form of a digitally available certificate, which can be downloaded online from the government / official portal and can be saved on the mobile phone and other such devices.

Countries may adopt variations in the format. Some versions might also allow people to prove that they have tested negative for the virus, and therefore can more easily travel. Different versions are being worked upon by airlines, industry groups, nonprofits, and technology companies and the end game would be to make it as simplified and accessible as possible. One can expect a platform similar to a mobile app or a digital wallet.

This attempt to digitize vaccination status to facilitate safer and convenient travels can also be seen as a component of the larger strategy to digitize travel and associated processes. The International Air Transport Association (IATA) has been working on digital solutions to streamline the travel credentialing process for years. With the onset of the pandemic, the IATA has focused its efforts towards providing vaccination status. The core idea is to make available all the relevant information easily accessible online and downloadable on electronic devices like the mobile, quite like other travel documents, so that a significant amount of time is saved in checking and verification procedures.

The IATA Travel Pass is a mobile application that will assist travelers to digitally store and manage their verified certifications related to COVID-19 testing, vaccination proof, digital passport etc. It will manage and verify the traveler’s COVID-19 status in line with governments’ health and border requirements.

The Travel Pass will incorporate four open sourced and interoperable modules, which can be combined for an end-to-end solution: 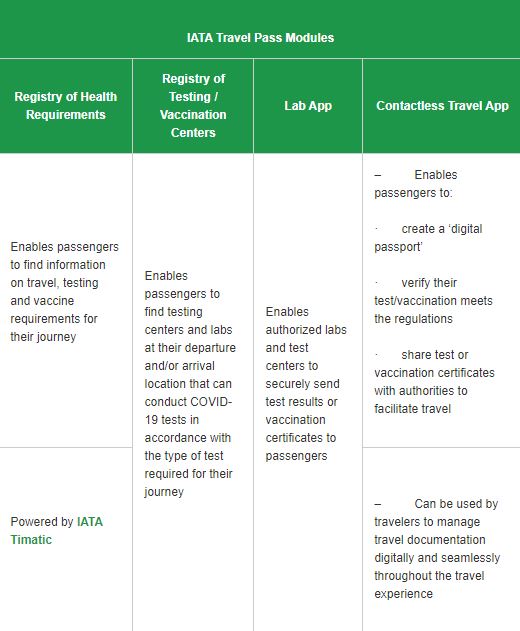 Existing Vaccine Passports Across The World

Many countries have introduced vaccine passports, with variations suited to their jurisdictions. Denmark was reportedly the first country to launch its own digital COVID vaccine passport. Hungary has launched an ‘immunity passport’ that acts as evidence that the traveler had been earlier infected by the coronavirus and thus has antibodies against the diseases. Similarly, most European Union countries also have been using digital vaccine passports to facilitate travel. The US, too, introduced its first vaccine passport called the ‘Excelsior Pass’ in June, 2021. This passport is mainly a quick response (QR) code that can be scanned to verify an individual’s vaccination status.

Many institutions like the World Economic Forum as well as private players like IBM, Microsoft, Oracle, Mvine, etc. too have launched their own versions of digital vaccine passports.

Why Is There A Need For Vaccine Status Documentation

Why India Is Opposed To Vaccine Passports

The World Health Organization (WHO) as well as many developing countries, including India, have opposed these vaccine passports on the basis of the core argument that they are discriminatory. Developing countries, with a large population, have a considerably low rate of vaccination coverage and this move will put them at a disadvantage vis-à-vis developed countries. Additionally, those who choose not to get vaccinated despite being offered the vaccine may also lose out on opportunities. There is a danger of stigmatization of individuals who lack certification.

Several other objections that have been raised are as follows: