Why Vietnam Remains An Attractive Destination For US Businesses

Vietnam Briefing examines the Vietnam-US bilateral relationship, including trade ties, imports, exports, and as foreign policy. We also look at why this relationship is only expected to grow presenting opportunities for US businesses in the Southeast Asian country.

Vietnam and US’ close ties and relationship have further given impetus to strong economic growth and expanding trade ties.

Bilateral trade between both countries has been on the high, with trade hitting US $111.5 billion in 2021 as per Vietnam Customs. In addition, Vietnam’s exports to the US rose 25% to reach US $96 billion in 2020 accounting for 28.6% of the country’s total exports.

As Vietnam further opens up its economy, the American Chamber of Commerce (AmCham) notes that there are significant opportunities for US businesses in Vietnam. Despite the pandemic, the US was Vietnam’s largest buyer of Vietnamese products.

Vietnamese Deputy Ministry of Industry and Trade, Do Thang Hai also reiterated that the US is an important partner of Vietnam, citing the increase in two-way trade between both countries. He also stated that the pandemic has given opportunities for both Vietnamese and American firms to coordinate and develop new supply chains and establish supply systems to ensure sustainability and continuity.

On March 8, at the Vietnam-US Business Summit in Hanoi, Vietnam’s Prime Minister Pham Minh Chinh called on businesses of both countries to strengthen partnerships and expand on bilateral ties. US Special Presidential Envoy for Climate John Kerry also delivered a speech at the summit.

US businesses have prioritized and identified healthcare, digital commerce, energy, and climate change as areas of cooperation with Vietnam and have plans to bring US medical delegations for site visits as well as explore possibilities in the energy sector.

It’s no surprise then that business ties and trade between both countries have been growing.

Vietnam exports to the US included electrical machinery, furniture and bedding, knit apparel, machinery, and footwear. 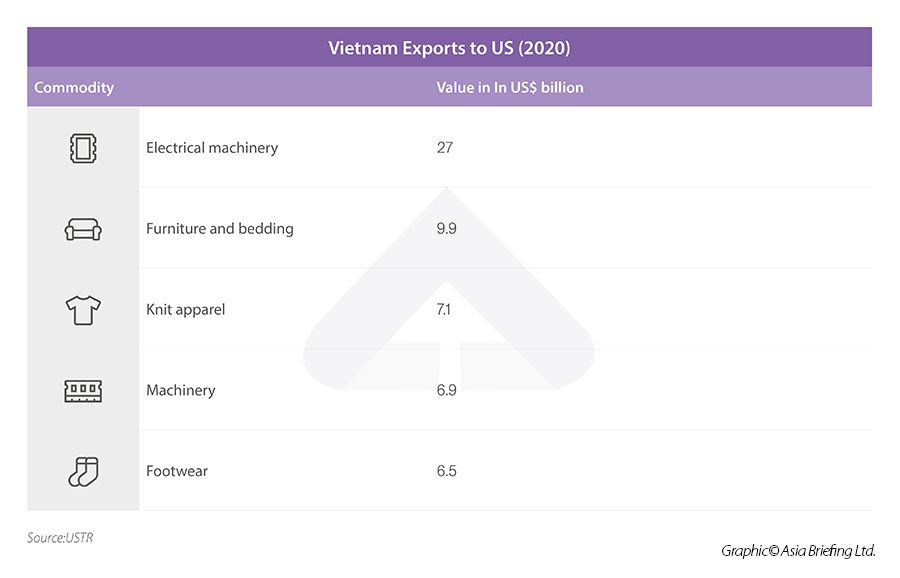 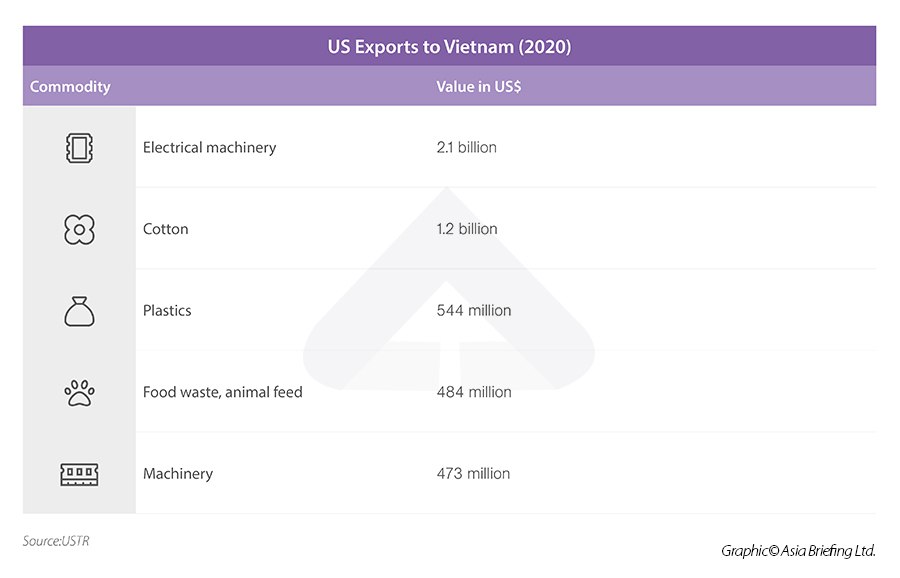 US-based Universal Alloy Corporation (UAC), which manufactures electronics devices for airplanes built by Boeing and Airbus, has made an investment of US $170 million at the Da Nang Hi-Tech Park. The company plans further expansion in the coming years.

It should also be noted that several investments by US companies come from Singapore and Hong Kong. Examples include Intel and P&G. Singapore leads and represents the lion’s share of FDI into Vietnam, while Hong Kong was fifth on the list.

In 2021, the US imported smartphones and accessories from Vietnam worth around US $96.2 billion rising by 10% year on year. The US was also Vietnam’s largest importer of computers and electronic products with a value of US$12.7 billion. Apart from this, the US imported machinery and equipment and also took the lead in apparel imports from Vietnam at US$16.1 billion contributing to Vietnam’s GDP.

Vietnam is set to open for international tourism on March 15. While the government is yet to release specific details, it hopes to restore visa policies as before the pandemic. Recently, Vietnam Airlines debuted its first commercial direct flight connecting San Francisco and Ho Chi Minh City. This direct regular connection will further help people to people ties, business, and tourism.

US foreign policy under the Barack Obama administration focused on establishing the Trans-Pacific Partnership (TPP), which was poised to become the world’s largest free trade agreement (FTA) and cover 40% of the global economy. Vietnam was supposed to benefit immensely with exports poised to grow by 15% under the TPP. Instead on March 8, 2019, the remaining countries signed the Comprehensive and Progressive Agreement for Trans-Pacific Partnership (CPTPP) after the US pulled out

Several American Chambers of Commerce organizations from Singapore, New Zealand, Malaysia, and Vietnam have urged the Biden administration to begin the process of joining the CPTPP, arguing that the US business community is at a disadvantage since the US pulled out.

They argue that the CPTPP is one of the highest-standard multilateral agreements in existence — attributed to the US’ role as a lead negotiator during its initial draft. Indeed, at the event in Hanoi, AmCham hoped that the US would join the CPTPP to further business opportunities.

While US President Biden has so far, shown a lukewarm response to trade and free trade agreements with Asia, Vietnam’s reference in the Biden administration’s Interim National Security Strategic Guidance shows that Vietnam is an all-important partner of the US. Both countries’ strategic relationship remains on an upward trajectory. It is in this hope that analysts expect a US-Vietnam FTA in the near future.

Under the Biden administration, US Vice President Kamala Harris initiated a visit to Hanoi, the first by a US vice president since the end of the war. The aim of the trip was to build relations and upgrade their bilateral relationship to a strategic partnership. Harris and Vietnamese leaders reaffirmed the strength of the US-Vietnam comprehensive partnership by the opening of a Peace Corps office in Hanoi as well as the construction of a new US embassy in Hanoi.

The US is likely to continue former President TruFPERmp’s confrontational approach towards China to counter its global economic influence.

It’s widely agreed that Vietnam has economically benefitted from the US-China trade war and this is expected to continue to thrive under the current US trade policy. With most of the US tariffs on Chinese products remaining in place, foreign investors will be compelled to look for other locations to relocate their manufacturing production – with Vietnam emerging as an ideal China plus one destination in recent years.

US businesses have also noted that Vietnam is an important link in global supply chains and this is role is only expected to strengthen.

This manufacturing shift, however, is not only brought about by the trade war but includes factors such as geopolitics, rising labor costs in China as well as the need for diversifying input sources and supply chains amid the pandemic.

In 2020, the US Department of Treasury labeled Vietnam a currency manipulator, this charge was later dropped stating that no countervailing duties would be imposed on Vietnam. Nevertheless, the US is likely to keep an eye on Vietnam including its widening trade deficit.

In addition, much of Vietnam’s military remains Russian-built. Given the current geopolitical situation and strict sanctions on Russia, it could derail Vietnam trade and warrant sanctions. Already some Vietnamese exports have been hampered due to sanctions.

Before sizing up Vietnam as a potential destination for relocation, US investors must do their due diligence and consider several factors, such as identifying a location, raw materials, sourcing partners, and supply chain logistics.

Why Vietnam Has Become A Promising Alternative For US Businesses In Asia
Investing In Shanghai: Industry, Economics, And Policy
China’s Yacht Market: Opportunities And Challenges For Foreign Players
Understanding China’s Internet Healthcare And Opportunities For Investors...
What Is China’s Green And Low-Carbon Plan And Why Is It Relevant To Forei...
Investing In Shanghai: Industry, Economi...
China’s Yacht Market: Opportunities ...
Understanding China’s Internet Healthc...
What Is China’s Green And Low-Carbon P...
Following four decades since the...