Future homeowners that acquired houses through a pre-pay model are refusing to pay mortgages on unfinished homes. The boycott comes a year after major Chinese property developers began to default on billions of dollars worth of loans. The current situation is a culmination of decades of rapid property expansion followed by regulators’ efforts to deleverage the industry. We explain the events that led to the China mortgage boycott and discuss measures the government is taking to address the issues, as well as the potential impact it could have on the property market.


In mid-July, thousands of would-be homeowners across China announced on social media they would refuse to pay the mortgages on their homes. The homes in question were acquired through a pre-pay model, in which buyers acquire apartments that are unfinished – or in some cases have not yet broken ground – when the initial deposits are paid.

In exchange for the pre-payments, developers promise delivery of the completed homes within a certain time frame, but amid overly ambitious development plans, sky-high debt, and a tightening regulatory environment aimed at deleveraging the industry, many have failed to do so. This has left some households making mortgage payments for several years before being able to move in.

With a deepening housing crisis underway, more and more developers may be unable to deliver on presold property, potentially frustrating even more homebuyers. The so-called mortgage boycott has spread to over 100 cities, threatening to further destabilize the property industry, which has become increasingly reliant on mortgages.

In response to the crisis, the government has taken steps to address the concerns of borrowers, including urging banks to increase funding for unfinished housing projects and mulling a mortgage freeze for affected borrowers.

We discuss the events that led up to the current situation and look at how the government is tackling the difficulties facing China’s property sector.

Background: Events Leading Up To The 2021 Property Crisis

China’s economy is hugely reliant on the property sector. Much of China’s GDP growth and rise in living standards over the last couple of decades can be attributed to property development, and the property sector is now estimated to account for between 17 to 29 percent of GDP, depending on the scope of sectors included. 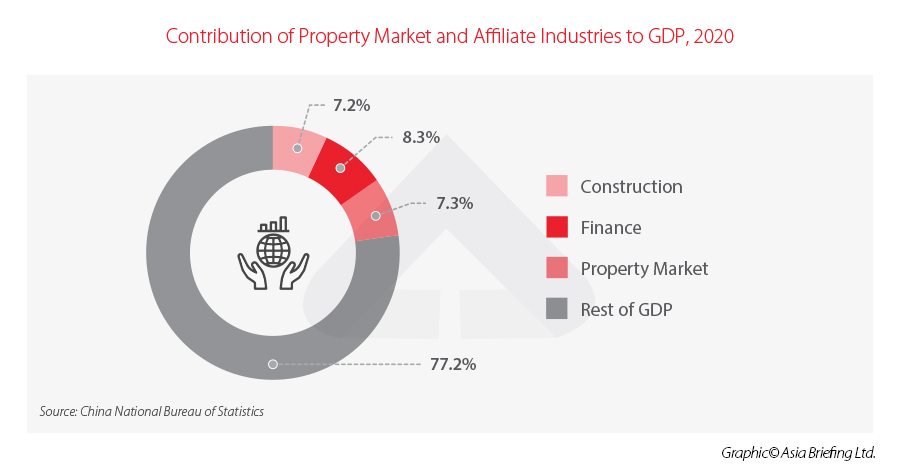 In this process, property developers have become some of the biggest companies in the country, with the largest, Country Garden, bringing an annual revenue of over US$100 billion in 2021.

It is not just the economy that relies on property – individual households do too. According to data from HSBC, 90 percent of urban residents own property, and over 70 percent of household wealth is tied up in property. Property is widely seen as one of the most stable forms of investment and a foolproof means of ensuring wealth and security for one’s family. In addition, cultural traditions mean that many young married couples prioritize purchasing a home, with many getting help from family members.

The high housing demand has led to a booming property sector and soaring house prices over the last decade. This in turn has fueled the speculative property investment market, where individuals buy second or third homes in the hope to resell them for a higher price. This situation has been compounded by an imbalance of supply and demand of housing, with large metropolises facing severe shortages and smaller cities struggling to fill occupancy in large housing developments. 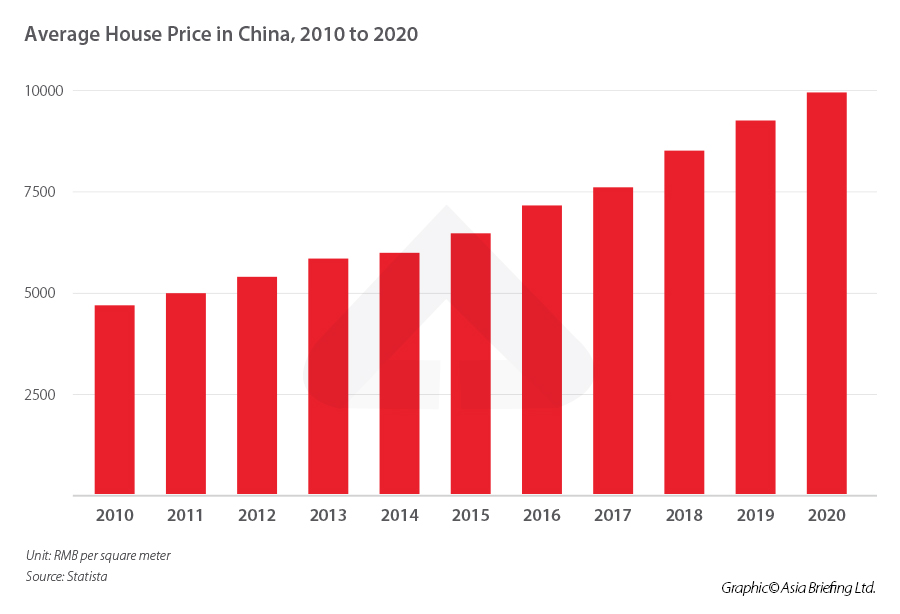 The majority of property built by developers is residential. In 2020, property developers built 16.4 trillion square meters of residential housing, accounting for about 73 percent of all new builds.

Property investment, which took a hit during the initial outbreak of the COVID-19 pandemic in 2020, has continued to fall after a temporary uptick in 2021, with growth declining by 5.4 percent in the first six months of 2022. In addition to being a clear indication of the sluggish economy as major COVID-19 lockdowns were implemented in the spring, this drop also indicates falling confidence in the property market as a whole. 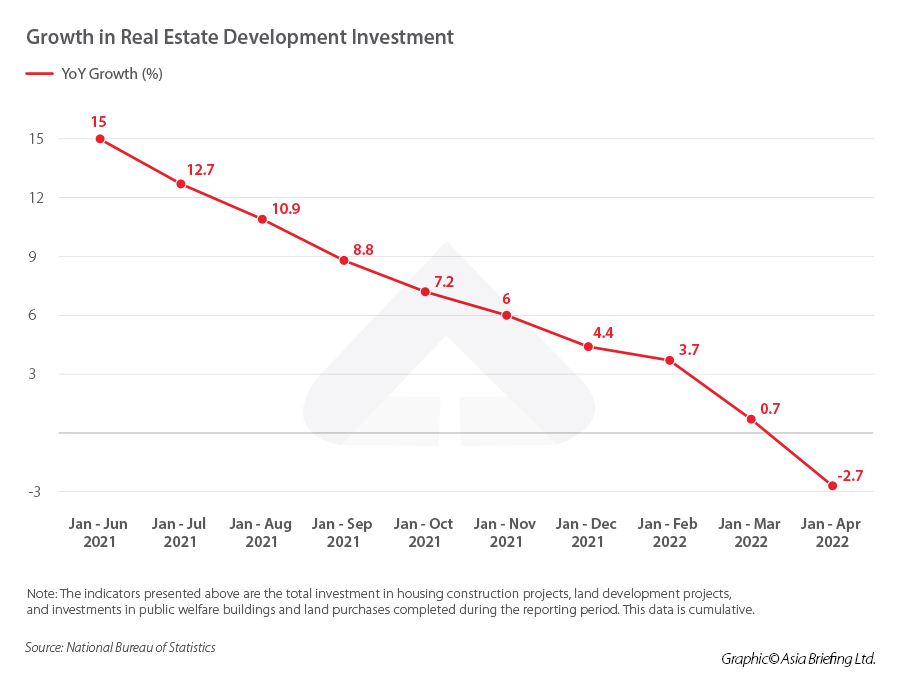 While property developers were bringing in revenue, they were also racking up billions of dollars in debt. In 2020 – the year before the effect of a series of property policies began to bite – Chinese property developers took out RMB 2.6 trillion (US$419 billion) in domestic loans.

This debt accumulated to a total of RMB 33.5 trillion (US$5.2 trillion) as of June 2021, according to financial services company Nomura. 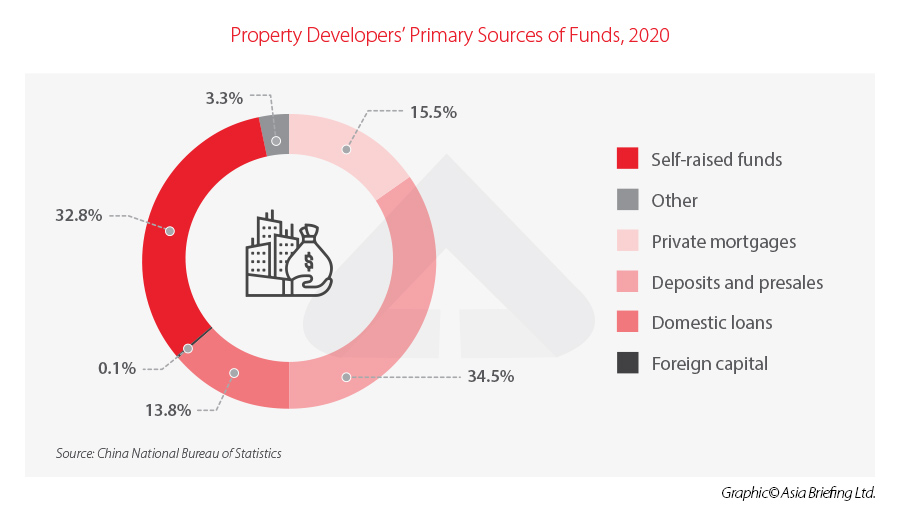 In addition to credit, a large proportion of property developers’ liquidity comes from deposits and presales, many of which are sold to individual home buyers. According to statistics from the National Bureau of Statistics, 34.5 percent of property developer’s funding came from this source.

The property pre-sale model, in which buyers place a deposit and begin paying a mortgage on a house that has not yet been built, became popular due to a lack of housing in major cities. According to Director of the Center for Urban and Real Estate Research at Renmin University of China Kuang Weida, as cited by Yicai Global, prospective home buyers concerned that property prices would continue to rise before property became available to them were willing to risk buying a home that was not yet finished or hadn’t yet been built.

Developers typically give buyers a timeline in which the property will be finished. However, failure to deliver the homes in the timeframe provided has led to a breakdown of trust between developers and home buyers, acting as a catalyst for the current turmoil.

In August 2020, after a meeting between the People’s Bank of China (PBOC), the Ministry of Housing and Urban-Rural Development, and 12 of China’s largest property developers, China implemented the so-called “three red lines” policy. This policy seeks to deleverage the industry by placing restrictions on lending for property developers that don’t meet the “three red lines” criteria.

The “Three Red Lines” Are:

Developers that fail to meet all three of the above criteria are not allowed to increase their annual debt liability, whereas those that meet one or two of the criteria are limited to five and 10 percent annual growth in debt respectively.

Although the three red lines policy was introduced in 2020, the full impact on the property sector would not become apparent until 2021, when the debt of major developers began to mature.

According to estimates from S&P Global, only 6.3 percent of developers met all three criteria in 2020. One of these developers is Evergrande, which had accumulated over US$300 billion in liabilities, including US$19 billion in overseas bonds. The “three red lines” policy meant that the company was no longer able to continue borrowing from banks in order to pay off or refinance its loans. Other major developers facing similar financing problems were Shimao Group, Kaisa, and Yuzhou Group.

In mid-July, thousands of people that had made pre-bought homes from property developers announced they would refuse to pay mortgages on homes that had not been delivered. The boycott began in Henan province and has since spread to Hunan, Hubei, Shaanxi, Hebei, and other provinces.

Failure to deliver on presold homes is not a new issue, with financial services company Nomura estimating that only around 60 percent of homes presold between 2013 and 2020 were delivered. In September 2021, protests broke out demanding property developer Evergrande resume construction of pre-sold homes.

A short documentary released by New Fortune Magazine on Weibo follows 300 families who chose to move into their pre-purchased homes that had been left unfinished for eight years after a series of setbacks, including bankruptcy and restructuring of the developer.

According to estimates from GF Securities Co., as cited by Bloomberg, the boycott could affect up to RMB 2 trillion (US$295.5 billion) in total balance of loans across at least 50 cities in China.

The COVID-19 pandemic has likely played a part in triggering the recent action taken by individuals. Recent lockdowns have driven up unemployment rates, which combined with rising rent driven by the high house, has placed additional pressure on households.

What Has Been The Government’s Response?

The government – both central and local governments – have taken steps to address the frustrations of home buyers and ease the pressure on the property market as a whole. In response to the mortgage boycott, the China Banking and Insurance Regulatory Commission (CBIRC) has requested banks to increase lending to property developers in order to help them complete unfinished housing projects.

Media outlets have also reported that the government is considering a grace period for mortgages on unfinished property without incurring any penalties or impacting the credit score of lenders, which could help alleviate the pressure on households. However, this plan has yet to be officially announced at the time of writing this article. According to estimates from Citibank, the total amount of mortgages that could be forfeited would amount to US$4.6 billion, a manageable amount for the banks.

Several cities across China, including Beijing and Tianjin, also took steps at the end of 2021 to increase oversight over housing presales. Measures include requiring property developers to ensure that funds raised from the presales are used on the housing development itself rather than other projects, as well as placing limits on the withdrawal of non-essential funds.

To address the overall slump in the housing market, China has cut its mortgage interest rate several times in 2022. In May, the PBOC cut the five-year loan prime rate (LPR) – the benchmark corporate loan and mortgage rate for commercial banks – by a record amount, from 4.6 percent to 4.45 percent. This LPR cut made borrowing cheaper for both outstanding and new mortgages, in the hope to boost housing sales and reduce costs for current borrowers.

These steps indicate that the government is seeking to roll back some of the more stringent policies on borrowing by property developers in order to stabilize the industry.

How Will China’s Mortgage Boycott Impact The Property Sector?

The mortgage boycott has the potential to place further stress on developers that rely on housing loans if it continues to spread. However, analysts have said that the scope of affected mortgages remains relatively small. According to GF Securities, the amount of overdue mortgages is estimated to account for less than one percent of the total mortgages of lenders.

China Banking and Insurance News, the official newspaper of the CBIRC, reported that several banks have stated that they are inspecting the unfinished projects and that the scope of projects affected is relatively small. ICBC, a major commercial bank, announced that at the end of June, only 0.31 percent of its RMB 6.36 trillion (US$939.8 billion) in mortgages were non-performing and that the risks were controllable. It also stated that it has suspended projects involving non-performing loans, which amounted to just RMB 637 million (US$94.1 million), or 0.01 percent of its mortgage loan balance.

The breakdown in trust in institutions is arguably the bigger issue for banks and developers. Prospective home buyers, many of whom are already under increasing economic pressure due to the slowing economy and sporadic COVID-19 outbreaks may be more hesitant to purchase a house or choose routes to buying other than mortgages. Swift action by local governments and related institutions will be required to alleviate consumers’ fears and instill trust that presold homes will be built in the promised timeframe.